The deadline for applications for the
Holistic Doula Program is February 20th. 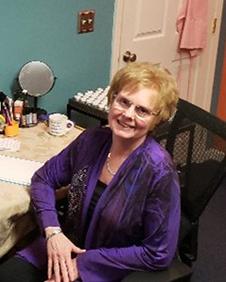 Amy Graham, Class of 2016. Learn how natural health and healing brought her to the Naturopathic Institute of Therapies and Education thus catapulting her to a new career after she was forced to retire!

Amy Graham was born and raised with three siblings near Toledo, OH, where her mother preserved everything out of the garden and orchard, and her father fixed everything that needed fixing! She was very active in school organizations, especially instrumental music and girl’s sports. Amy chose to attend college and major in instrumental music. While her parents were skeptical at first, they soon became her biggest cheerleaders. She received her bachelor’s degree in music education from Bowling Green State University, and a master’s degree in education from Defiance College.

Life for Amy progressed with her career, moving to Wyoming where she gave private music lessons and owned a dog grooming business. While she had dabbled in natural health most of her adult life, her interest was piqued while pregnant with her second child. A dog owner had a health food store. The store owner was so knowledgeable and had impressed Amy so much that she began reading more about vitamins, supplements, and emotional healing. Amy’s mother developed rheumatoid arthritis while Amy was in Wyoming. Amy did the research, made suggestions for her mom, and she got better, which further supported Amy’s natural health interest.

When Amy and her family moved back to Ohio, they were not in a supportive atmosphere for what she thought was healthy eating (lacto-ovo vegetarian), as in her family were beef farmers! This was not all bad (she learned later), as none of her family’s metabolic types were the lacto ovo vegetarian type, anyway!

Amy went back to teaching and for several years had a small marching band. That meant that if someone was missing there was a noticeable gap, so Amy was determined to keep everyone healthy. She made suggestions for Vitamin C, the Lion Exercise, hydration, meditation, prayer, you name it, so she could keep the group marching on. The students teased her and said she should become a doctor (little did they know)!

The final push to really understand and practice holistic health was when she was in a near fatal motorcycle incident. She was T-boned by a pickup truck while riding her motorcycle. Her injuries were severe, a partially attached left leg and crumpled right leg, along with numerous bumps and bruises. She was transported by life flight, and at the medical center her family and fiancé were told that she would lose her left leg.

After the first of 16 surgeries, the surgeon told Amy that she could still lose her leg, but Amy was determined to keep her leg! In concert with the usual medical aids for these types of injuries, Amy also included a naturopath, chiropractor, energy healer, magnets, supplements, and other natural methods to save her leg and heal the other one. Originally, she was told that she would have to have cadaver parts for the right leg. After nine months, the orthopedic surgeon finally agreed that she was going to keep her leg. He declared it was a ‘great save’.

So, the divine plan was made: “Apparently it was time to leave my beloved career, where by now I was director of bands at my alma mater. I was forced to retire due to the motorcycle incident, and I fought to save my leg.”

It took 2 ½ years, and Amy was finally able to walk without any help. After using many natural methods, she was deeply impressed by their effectiveness. Several times during the healing process she was warned by the infectious disease doctor that she could not use these methods. The plastic surgeon however said to keep doing whatever she was doing, because it was working. As she healed, she decided that she needed something to do, because after all she was too young to retire!

Since the natural methods and lots of prayer had healed her, Amy enrolled in a natural health school, but it soon closed. She hadn’t known about NITE and was happy to now find it. After a visit at NITE, while having lunch at a local café with her husband Steve, they decided she was going to attend. She liked the Institute because it was a physical location for classes – face-to-face and was looking forward to meeting different people and learning from them. There was also that part of Amy that never felt quite done with education. She wanted more!

During her education at the Institute, Amy also found additional interests like gardening, and frequency jewelry among others. Most importantly Amy found a new Amy, becoming a Board Certified traditional Naturopathic Doctor was a new beginning, a permission to let go of the former person.

Amy offers some advice for the prospective student: “It is always a positive move to seek more information regarding health. It is imperative that we learn the truth! We in this world are constantly being bombarded with information about health, and how to take care of ourselves – good and bad.” As Amy first came to the Institute, it was all for her immediate family. After that came friends, and then clients. “Taking care of ourselves needs to come first in order to serve others to the best of our ability.”

Earning her Board Certified, traditional Naturopathic Doctor credential came with a sense of pride, an appreciation of all those talented gifted ones who have traveled this road before, and a huge awareness that she had not previously known. Amy gained so many wonderful friends, and still treats them as a treasure today. Amy developed better critical thinking skills, and values the journey of those clients who trust her for guidance.